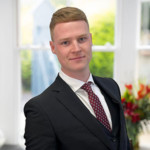 Background:
Samuel is currently in his 2nd six of pupillage, working under the supervision of Charlene Henderson.

Prior to joining Senate House Chambers, and alongside the Barristers Training Course, Samuel worked as a Court Officer at Nottinghamshire Coroner’s Office; he was responsible for assisting the Coroner during inquests, providing emotional support and information to the bereaved families.

During University, Samuel was: a Nottingham Law School Course Representative; an Ambassador for the Deputy Dean’s collaborative forum and the treasurer for the newly formed Court Visit Association Society. He was commended for his work by being awarded the Academic Award of Gold Student Group Leader.

Samuel served five years in the British Army as an Ammunition Technician, a specialist in explosives, bomb disposal and all types of ammunition. As a No. 2 Advanced Explosive Operator, he was the first line of management for junior soldiers and second in command within a bomb disposal team, on emergency response to counter terrorism. During this time, Samuel was deployed on numerous international operations, including the United States, Belize and multiple tours of Afghanistan.

senatehouse2022-10-03T14:18:12+00:00
Page load link
'Senate House Chambers' has updated its cookie policy. We use cookies to ensure that we give you the best experience on our website. A number of cookies we use last only for the duration of your web session and expire when you close your browser. Other cookies are used to remember you when you return to the Site and will last for longer. » Find out more about cookies » Change your cookie settings By clicking "OK" or clicking into any content on this site you agree to allow cookies to be placed. we'll assume that you are happy to receive all cookies on our website. OK
Go to Top